Sparrows are some of the most common birds in the United States. They were originally introduced to North America in the mid-1800s and populations have since grown to include an estimated 70 million individuals. The two most abundant species in the region are song sparrows and house sparrows. They are usually found in close proximity to humans, are opportunistic feeders, and compete with native bird species for food and nesting sites. 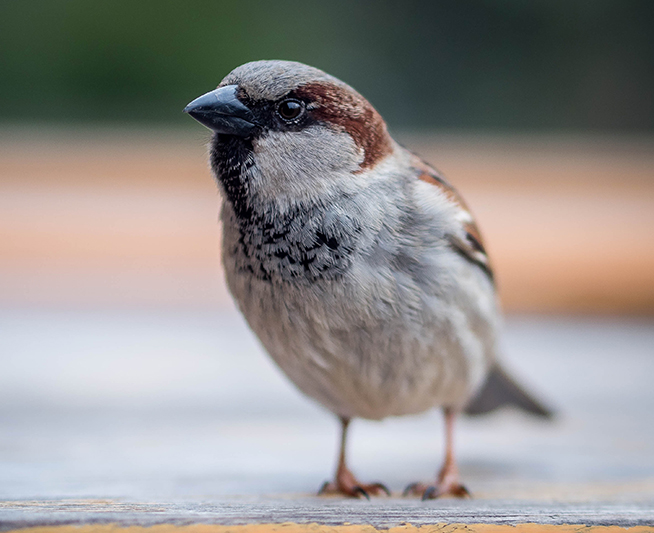 The two types of North American sparrows are similar in size but have slightly different features and markings. House sparrows are typically chestnut brown on top with tawny or white underbellies and black, gray, or brown patterns on their backs and wings. Males have black bibs, short black beaks, and gray patches on the top of their heads. Females tend to be duller in color with unmarked breasts and tan beaks. The coloration of song sparrows is dependent on their location in the United States. Some bear dark plumage, while others have lighter brown or gray feathers.

Song sparrows tend to nest in dense thickets of grass but enjoy a wide variety of open habitats, such as marshes, fields, backyards, and forest edges. Since they are well accustomed to humans, song sparrows will also nest among rosebushes or flowerbeds. House sparrows prefer to nest in manmade structures, such as behind signs, beneath roof overhangs, among the rafters of open warehouses, and in streetlights. On city streets or in municipal parks, sparrows are often seen hopping along the ground pecking at seeds or bits of food.

Sparrows are extremely common around homes and yards. House sparrows in particular share a strong bond with humans and rely on them for everything from nesting sites to food. They like to nest in intrusive places, like roof eaves or in unoccupied outbuildings, while song sparrows tend to remain innocuous, living in gardens or bushes.

House sparrows are aggressive birds that harass and attack other native species, destroying their eggs and driving them away from food sources like bird feeders. Flocks of sparrows wreak havoc on home gardens and grain crops, as well as livestock feed and grass seeds. Their nesting habits cause further damage by blocking drains and ventilation ducts. House sparrow nests located in streetlights, on store signs, or under roof overhangs can become fire hazards.

The most effective way to discourage house sparrows and song sparrows from taking up residence in unwanted areas is to remove potential nesting sites and food sources. Property owners should do things like eliminate birdfeeders, take care not to lay down unprotected grass seeds, seal or block crevices, holes in signs, unsecured lamp posts, and overhangs with wire mesh or cloth, cut back overgrown shrubbery, and mow thickets of grass.

Though they are known to coexist peacefully with humans, sparrows are wild animals. As such, people should not attempt to approach or trap the birds. Critter Control wildlife experts are prepared to help manage unwanted sparrow problems in effective and humane manners.

Request a Quote
Sparrow
Birds in the bathroom fan or kitchen vent? Sparrows making nests in your attic or garage? Those little weaver finches in the attic may well be sparrows. Sometimes sparrows cause damage by pecking at insulation inside attics. The nests of sparrows can also be dangerous, as they can be potential fire hazards. Call Critter Control today at 801.997.9965 for effective sparrow removal, control and exclusion services.
Call For A Fast & FREE Phone Estimate Today
801.997.9965
(No Cats & Dogs)